We, readers and writers, compose an ongoing search party. Tireless, our lives long, open to hope and astonishment, we keep at it. We might search differently, or differently at different times: reading, we pursue discovery of human life through the word; writing, we search out the word by way of life.

Our two branches, of course, are very deeply connected; we enjoy an unending, labyrinthine relationship. One of the clues we hold in common, in the pursuit of literature—that’s where we’re going—a clue that deeply connects and binds us together, readers and writers, is pleasure. We must have suspected so from earliest years and when we heard in the nursery “Old King Cole” read to us and “How many miles to Babylon?”

Pleasure is a powerful sign. It is basically bound up with human passions. It began with, springs from, the passions of mind and heart. In our pursuit, reading and writing, it takes many different forms. It may be known, and recognized, as pleasure only in after-effect, a result, a revelation.

The new issue of Antaeus is devoted to pleasure in literature. It carries an essay by James Laughlin on the pleasures of reading in translation. It makes us realize that achieving such pleasure is a form of translation; the arrival of pleasure is the result of a translating process.

James Laughlin speaks of one of the gifts of Catullus: An immediacy which puts him close to such modern poets as William Carlos Williams. “Pound started me on Catullus,” he says, “A constant presence in my own work":

“Catullus could rub words so hard

together their friction burned a

Laughlin also points out that Robert Fitzgerald, that marvelous translator of The Odyssey, wrote in an essay how “the classical tradition is observed when art is wakeful to reality in the fullest possible sense, including the reality of previous works of art.”

“That perception,” writes Laughlin, “ and the skill to recreate the old poets in fresh, new language, was the clue to Fitzgerald’s greatness.”

Pleasure in literature takes many a different form, but we’re not here speaking of pleasure in the personal sense, that is, of the sentimental kind. Rather, we’re concerned with the pleasure Henry Green unforgettably described in his autobiography, Pack My Bag, which can leave you wordless with happiness but not easy with yourself:

“Prose is not to be read aloud but to oneself alone at night, and it is not quick as poetry but rather a gathering web of insinuations which go further than names however shared can go. Prose should be a long intimacy between strangers, with no direct appeal to what both may have known. It should slowly appeal to feelings unexpressed, it should in the end draw tears out of the stone.”

The dying Gusev, lying in fever in the ship’s infirmary, is ridiculed by the sick mate beside him for his uneducated beliefs. Guzev believes, for instance, that a storm at sea means the wind has broken loose from its chains. But he wonders, “What is there that is strange or out of the way about…the wind breaking loose from its chains?” When he dies, and is to be buried at sea, Chekhov writes: “It is strange that a man should be sewn up in sailcloth and should soon be flying into the sea. Is it possible that such a thing can happen to anyone?” And then, when it does happen, deep below the surface of the sea a shark rips the shroud off Guzev from head to foot, while above, the sky in which the sun is setting “takes on tender, joyous, passionate colors for which it is hard to find a name in the language of man.” The story asks what, in life, equally what in death, is to be called strange? It can only observe, “To think that this should happen to a human being!”

The very greatest mystery is in unsheathed reality itself. The realist Chekhov, speaking simply and never otherwise than as an artist and a humane man, showed us in fullness and plentitude the mystery of our lives.

Could there be, for a reader, for a writer, a greater source of pleasure?

Reading in its greatness, The Book of Job can lift us off our feet and raise the hair from our head. Yet this too is evidence of that universe of pleasure that literature has brought us to discover. If you can’t conscientiously call this “pleasure,” there is still no other word for a magnitude of expansion to accommodate the scope of the reader’s acknowledgement, the searing awareness, the giant recognition he must yield up to The Book of Job. Blake’s magnificent creation for The Book of Job rose out of the recognition, and those works we know from their exhibitions in this library. Job has been sung, has been performed in at least one modern play, and perhaps the dancer among our artists receiving the awards tonight can tell us if Martha Graham didn’t choreograph a dance revolving around the ordeals of Job.

Pleasure is not another word for a book’s content. Pleasure, whatever its source, has to be made. It comes from—because it exists in—the act itself of creating. This is the nature of the pleasure to be found, and taken, in all art, and it’s why there is pleasure, you could say a divine pleasure, in The Book of Job.

Eudora Welty was the master of short stories notable for their imagery, sharp dialogue and fierce wit. A revered figure in contemporary American letters, she wrote from her home in Jackson, Miss., where she lived since high school and where she wrote most of her stories, novels, essays, memoirs and book reviews. She died in 2001 at age 92.

She was awarded a Pulitzer Prize in 1973 for her novel The Optimist's Daughter. She also received the National Book Critics Circle Award, the American Book Award, eight O. Henry Awards and the Gold Medal of the National Institute of Arts and Letters. She was inducted into the French Legion of Honor and received the Medal of Freedom in 1980. 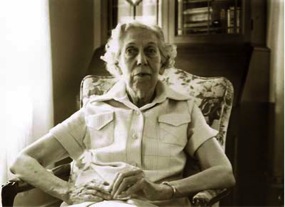