Thank you very much.  Thank you.  I feel called on to say that as a distinguished professor of humanities, we don't know what it is, either, and somehow I feel called on to remind us of what we already know, that the prerequisites for being a poet are very odd.  Because on the one hand, Lucille Clifton, who is a distinguished professor, did not graduate from college.

I wanted to start the remarks this evening with a poem.  I want to read three poems: one in the beginning, one in the middle, and one at the end.  Two of them are by me.  The first is being read because it honors my mother.  My mother's birthday would have been November 1st.  She died, dropped dead, actually, at 44 years old.  Monday she would have been 85.

I wanted to read this poem, and you will understand why.  My mother wrote poetry, iambic pentameter.

she is standing by

her hand is trembling.

her hand is holding

a sheaf of papers.

she throws them into the fire.

her eyes are animals.

each hank of her hair

is a serpent's obedient

she will never recover.

remember. there is nothing

you will not bear

for this woman's sake."

For my mother, who burned her poems in a coal stove as I watched.

It's certainly an honor to be part of this occasion.  Congratulations.  Some people would say that this is what it's all about, this celebration of ourselves as poets and writers and artists, but no it's not.  Of course we know this is not what it is about, or what we are about.  We know that when we return to our homes, it is not to a place of refuge.  It is to a job or a chore or a responsibility.

Our place of refuge is our art, these scratches we make on a hungry slate or page or screen.  And so we understand that it's not so much about being celebrated writers, but about writing, that lonely, personal art.  It's about preserving, too, even after this.  I know about that a little bit.

When my first book came out in 1969, my children were seven, five, four, three, two, and one.  My sister, who loves me very much, said once, "I love you.  I will never babysit."  So one has to have courage to do this thing that we have committed ourselves to doing.  It is not about being celebrated writers.  It is about writing.
Here's a poem by Richard Wilbur, "The Writer."

In her room at the prow of the house

Where light breaks, and the windows are tossed with linden,

My daughter is writing a story.

I pause in the stairwell, hearing

From her shut door a commotion of typewriter-keys

Young as she is, the stuff

Of her life is a great cargo, and some of it heavy:

I wish her a lucky passage.

But now it is she who pauses,

As if to reject my thought and its easy figure.

A stillness deepens, in which

The whole house seems to be thinking,

And then she is at it again with a bunched clamor

Of strokes, and again is silent.

I remember the dazed starling

Which was trapped in that very room, two years ago;

How we stole in, lifted a sash

And retreated, not to affright it;

And how for a helpless hour, through the crack of the door,

We watched the sleek, wild, dark

To the hard floor, or the desk-top,

And wait then, humped and bloody,

For the wits to try it again; and how our spirits

Rose when, suddenly sure,

It lifted off from a chair-back,

Beating a smooth course for the right window

And clearing the sill of the world.

It is always a matter, my darling,

Of life or death, as I had forgotten. I wish

What I wished you before, but harder.

I began writing poems without ever thinking about that I might be a poet.  I, of course, grew up in the '40s and '50s in Buffalo, New York.  I never considered it was possible for somebody who looked like me.  I did not send things out.  Where would I have sent them?

I showed them to my mother, a woman who never graduated from elementary school, but who recited and composed verse, rhymed iambic pentameter.  She didn't think I wrote very well.

In fact, when I would try a poem—and in those days I used to try sometimes to write sonnets and things.  I did all the things that you do when you're learning your craft—she would look at the poem and she would say, "Oh, baby, that ain't no poem.  Let me show you how to write a poem."  Then she would rhyme something in iambic pentameter.

I continued writing for many years, with my only expectation that I would try to learn to do it well.  I did not expect to be taught how to do it.  I expected to try to learn, and I did.  I am still doing that, and you will, too.  You will, too.

I learned some of the things that one has to learn in order to be an artist.  I think they are the essentials.  Somebody asked Toni Morrison once what you needed to be a writer, and she said, "Patience and a job."  She's usually right about things.

Stanley Kunitz said it is about the art of being human, what it means to be human in this place and at this time, that it is for humans.  There is sometimes a tendency to write for reviewers and critics.  Not here, but other places.  And I think that it's good always to remember that we are, in some ways, historians of the inside of what it means to be human.

It is very hard to stay focused on that.  It is very hard, whatever happens with you.  And certainly in my life more things of celebration have happened than I ever would have expected.  I'm from Buffalo, New York, and I thought maybe one day I can live around in the good section.  I still think that's not impossible.

But I know that one can learn these things, to learn how to listen, to learn how to try.  My mother said to me once, "Baby, in your life your gonna stumble, but you might not fall.  And then if you fall, of course, get back up," to have the courage to even stumble, to have the courage to fall, and to remain always human, to remain humane and human.

An artist has, it seems to me, the obligation to not add to the chaos in the world, and it is a chaotic world.  If you have not noticed, you have not been paying attention.  I think it's important as an artist to pay attention.

I do not have to attempt to be a scholar, but once in a while they say I'm a scholar of the heart and mind.  When I was inducted into the Academy of American Arts and Sciences they were happy, because they said I was officially smart now, and that pleased me, too.

But this a poem that I wrote one day when I was in my office.  At my school I keep my door open, because I'm there for students, and if my door is open they know I'm there.  I have a colleague who knows that while I didn't graduate from college, I do have honorary degrees, a number of them.  She doesn't understand not only why I'm there, but why I'm walking around.  Why am I alive?  I think that's one of her concerns.

On that day I was feeling quite vulnerable, and so I wrote a poem, which I think is a poem which relates to you, to our art, to that which we hold dear, to our community.

won’t you celebrate with me

what i have made into

a kind of life? i had no model.

both nonwhite and woman

what did i see to be except myself?

i made it up

here on this bridge between

my one hand holding tight

my other hand; come celebrate

with me that everyday

something has tried to kill me

Congratulations for your bravery, your wonderfulness.  Thank you for allowing me to be part of this community.

Lucille Clifton was born in Depew, New York in 1936, and educated at the State University of New York at Fredoniaand at Howard University. She was the Distinguished Professor of Humanities at St. Mary's College of Maryland and was a professor of English at Duke University. Her awards included the National Book Award, the Juniper Prize for Poetry, an Emmy, and two nominations for the Pulitzer Prize in Poetry. Photo credit to Rachel Eliza Griffiths.

Lucille Clifton, "fury" and "won't you celebrate with me?" from The Book of Light.  Copyright (c) 1992 by Lucille Clifton.  Used with the permission of Copper Canyon Press, www.coppercanyonpress.org. 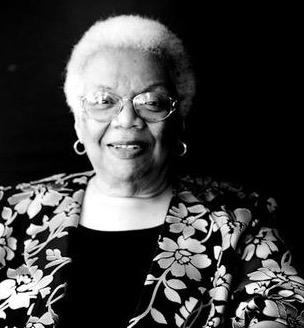