It’s a great honor to have been invited to speak to you this evening. The occasion is a happy one – it’s the moment when the Whiting Foundation recognizes and encourages brilliant upcoming writing talent. Congratulations to all!

My role here is a secondary one. It’s what you might call the Duchess role – what Duchesses would be doing if America hadn’t thoughtlessly done away with them in 1776, thus inaugurating 213 years of Duchess Envy. All my life I’ve fled the idea of being a role model – for heaven’s sakes, don’t live as I’ve lived, I want to tell the young – but I appear to have turned into a sort of role model anyway.

On this occasion it seems that I’m to act as a kind of symbolic dignitary – writers can’t be actual dignitaries, as they are by nature too undignified – and wield a virtual wand of blessing, like the Blue Fairy in Pinocchio, or wave a banner from a casement window as the young troops ride out to do battle. Gird on your word-swords, I must say to them! Buckle up those adjectives! Make sure your plots are tight, your epigrams sharp and pointed, your lyrical intervals lacking in bathos. Be vigilant – there are ambushes everywhere. On one side lurk the critics, getting ready to sneer and denounce, or worse, to praise for the wrong reasons; on the other side your parent figures, who always wanted you to be doctors, and who have furnished themselves with a list of writers such as Chekhov who were writers, yes, but doctors too: why can’t YOU do that? This is not helpful.

And on the third side is a stack of bills – bills for things like the rent – that whisper in their papery voices about the impossibility of making a living doing what you most wish to do. Alas, there is no inevitable connection, positive or negative, between talent and money. A bad book can make piles of money, a good book none. Or else a lot. It does happen. But nothing can be foreseen, because writing is among other things a form of gambling. You can win in one throw. You can lose disastrously. Fortune is a notoriously cruel goddess.

This is the moment for a bracing quote from Tennyson: “Doubt Not, Go Forward – If thou doubt’st, The Beasts will tear thee piecemeal.” Fare well, I will say to the anointed ten – the fate of our language is in your hands, and it is a crucial fate – for if these the future guardians of it should falter or disappear, and if even our human language should fail us –should it become a rusty and untrustworthy tool – where will that leave us?

But perhaps I should climb down off the soapbox and give some more practical advice. Forget what used to be called “literature,” I might say. It’s too risky. Too hard to drop-kick it through the gateposts of the Bestseller lists, and the inability to do so – in a winner-take-all environment – can be fatal. Write cookbooks, or books about vampires – you’d do well with either. Or troll through the classics, adding monsters – Tess of the d’Urbervilles and the Body Snatchers, Jane Eyre and the Creature from the Black Lagoon, War and Peace and Heads that Grow Out of your Armpits – the possibilities are endless! Better still – mix and match even more, and do a Vampire Cookbook! On second thought, maybe not – limited menu. But a Miss Manners Guide to Monster Etiquette -- now that would sell! With a little ingenuity and no shame, you can do well. Then, under a different name – a very different name – you can dash off a few masterpieces.

Here’s another helpful hint: invent some critics, then have them say some laudatory things about your work. This has been done. A painter friend of mine in Toronto made up an art critic called Don Rouge Humber and quoted him in ads, saying things like “So stunning words fail me” and “An oasis of pure optical pleasure,” “Depilatory fine art with a consistently crispy crunch – delightfully deconstructionist!” My friend thought people would surely realize that Don was pretend, but not so. He sold a number of pieces to folks who turned up, ready for a serious art experience because the esteemed critic Don Rouge Humber thought so highly of his work.

But perhaps I should put on my seriousness hat, and offer some words of cheer, to young writers and to readers and to publishers, as well – to all who inhabit the republic of the written word, as all are essential to the survival of that noble republic. For it cannot have escaped you that we live in trying times. When interviewers start asking you about the state of publishing instead of the state of gender relations, you know we’re in trouble. Is poetry doomed? Is the novel doomed? Is the BOOK doomed? (Not so far as I can see, or not yet.)

Or – a different sort of question -- Do the young still read? A question that invokes some long-gone non-existent golden age in which all the young DID read, and nothing but praiseworthy classics. Not in my high school, I might tell them. Reading complex literary works in the century or so in which we’ve had something like universal literacy -- has been a minority taste. But a minority taste well worth acquiring, for it really can be transformative: it can change lives.

But stories -- just as stories -- are not a minority taste. They’re a universal. Dennis Dutton, in his book The Art Instinct, proposes that art – and especially narrative art – is an evolved adaptation that human beings developed during their 80,000 – generation-long sojourn in the Pleistocene – a time when the ability to tell your kids about the time Uncle Mort got eaten by a crocodile, right over there, would have given those kids a distinct evolutionary advantage over other kids who could only find out about the crocodile firsthand. The arts are no frill – they’re part of our essential toolkit as human beings. We’ll make music and compose poems and tell stories as long as we’re on the planet. What’s at issue is the kinds of songs we’ll sing and the kinds of stories we’ll tell. And that’s where you’ll come in.

It’s not a profession, this track you’re on. It’s a vocation – a calling. There’s no pension plan, there are no guarantees, and there’s no magic potion. What you’ve chosen to do is brave and risky, but it’s also necessary – increasingly necessary as we move into a future for which no one, right now, has a convincing blueprint. You’ll be taking the ancient, ancient human language and its songs and stories that have been passed down to you, changing as they go; and through inspiration and hard work, you’ll fashion them into new forms that will in turn be moulded by their time, as everything we’ve done is, and has been; and then you’ll pass these forms on in your turn, if we’re lucky. If we are all very lucky.

So that’s the real magic potion: luck. That’s what I should be saying as I wave my virtual wand: Good luck to all of you. Very good luck!

Margaret Atwood is the author of more than forty books of fiction, poetry, and critical essays. Her latest work is a book of short stories called Stone Mattress: Nine Tales (2014).  Her newest novel, MaddAddam (2013) is the third in a trilogy, the second being The Year of the Flood (2009) and the first being the Giller and Booker prize-nominated Oryx and Crake (2003). Other recent publications include The Door, a volume of poetry (2007), Payback: Debt and the Shadow Side of Wealth (2008) and In Other Worlds: SF and the Human Imagination (2011). Additional titles include the 2000 Booker Prize-winning The Blind Assassin; Alias Grace, which won the Giller Prize in Canada and the Premio Mondello in Italy; The Robber Bride, Cat’s Eye, The Handmaid’s Tale, and The Penelopiad. Margaret Atwood lives in Toronto with writer Graeme Gibson. 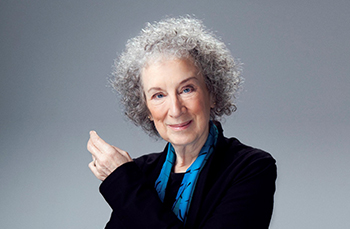