I want to congratulate all the winners.  It's very exciting and moving to talk to writers at the point of the substantial beginning of their careers.

In a way, one has mixed feelings.  A writer of my generation, a writer at my age, to address young writers, I think, feels a conflict of emotions.  An impulse to encourage and to congratulate and also, I guess, a certain amount of what I have to call sympathy. The life is not easy.  One spends a lot more time staying awake in quiet rooms than hunting lions in Africa.  But the thing to remember, I think for all of you, and all of us to remember, is that the writing life serves.

It is not something secondary.  It is not an indulgence.  It is service, and I think we all have to remember that at the worst of times.  And sometimes, we have the worst of times.  And sometimes, you know, there's nothing like it.  But above all, I think the thing to remember is this is valuable.  This is service.  Stay with it.  Some time ago, I was reading a history of art.  I came across this piece by E.H. Gombrich about what he calls "the conquest of reality."  And he's describing, really, Brunelleschi and Masaccio's discovery of the mathematical principles of perspective.

The term he gives to that process, the conquest of reality, kind of stayed with me.  Because it made me think of the constant balance between language and reality.  Norman Mailer once described the writing process as "an assault on reality."  And for years, all through the latter part of the 19th century, all through the 20th century, we've been trying to come to terms with that relationship between reality and language.  We've put to sleep the various competitions between different schools of writing, realism and neo-realism, romanticism, all that.

I think we've established that the realist mode, for example, is really no closer to reality, to lived life, than any other mode.  Language is language, and life is life.  And this constant game of hide-and-seek that we play continues to be a very mysterious process.  And yet, it's a necessary enterprise.  When I wasn't reading E.H. Gombrich, I was reading graffiti here and there.  And one of the graffiti that really made me ponder — it kind of terrified me, in a way — was on a wall at one of your high-class liberal arts colleges.

It only could be seen in a place like this, and I've been pondering it ever since.  I think of it once a day.  "There are no metaphors," it says.  "There are no metaphors."  This is a kind of intellectual terror.  That would mean, if there were no metaphors, that everything is only what it is, that a portion of language stands for nothing beyond itself.  This suggests a universe of singularities in which nothing refers to anything else.  A situation of absolute loneliness.  A situation in which language exists in total aridity.  I mean, it is truly terrifying.

But we know that there are metaphors.  In a way, we live by them, because there's absolutely no way of making sense of this stuff.  What have we here?  We have Wednesday — something called Wednesday.  Out in the middle of existence, we're out here, we're just out here.  We don't know what it means.  It has no top, no bottom and sides, but it has metaphors.  It has language to connect it.  We impose a meaning on what's happening to us by driving events into a narrative.  We must have that.  If we don't have it, we are caught in that universe of singularities.

So this story is really as necessary as bread.  We cannot impose any meaning on our lives unless we look at other people's lives, unless we think of history as a series of narratives, and unless we are able to apply some kind of sympathetic imagination to that which is other.  To the sensibility, the intellect, that is other than ourselves.  This is what narrative does.  This is what fiction does.  It's also what non-fiction does, because it seems to me that serious non-fiction is simply the imposition of a sensibility on the narrative quite as a novel does.  I'm not one of the people who spends a lot of time being concerned with the authenticity of non-fiction, because I think authenticity is a quality that has to do with something other than the exactitude of recollection.

The ideologies of the 20th century, the worst ideologies of the 20th century, were an attempt to replace life with art. Because for all of the terror and all of the tyranny and all of the brutality of those ideologies, they were based on aesthetics gone mad.  But aesthetics all the same.  A kind of romanticism.  A kind of transcendental attempt to breathe insight into history, to carry story, to carry mythos, something very necessary, into a monstrous environment, a monstrous movement that destroyed thousands and thousands of lives.  So we must not underestimate the power of art.  It is not a tame animal.  It is capable of causing all kinds of repercussions in the world.

To get back to artist's service, something that I have always believed in and always argued for, I would take it back to the words of Conrad, who wrote in the preface to one of his great novels — some of the best things that anybody ever wrote about the process of writing  — "To snatch, in a moment of courage, from the remorseless rush of time, a passing phase of life, is only the beginning of the task.  The task approached in tenderness and faith is to hold up unquestioningly, and without fear, the rescued fragment before all eyes.  It is to show its vibration, its color, its form; and through its movement, its form, and its color, reveal the substance of its truth, disclose its inspiring secret: the stress and passion within the core of each convincing moment.

In a single-minded attempt of that kind, if one be deserving and fortunate, one may perchance attain to such clearness of vision that at last the presentation vision of regret or pity, of terror or mirth, shall awaken in the heart of the beholders that feeling of unavoidable solidarity.  Of the solidarity in mysterious origin, in toil, in joy, in hope, in uncertain fate, which binds men to each other and all mankind to the visible world."

Robert Stone is the author of seven novels: A Hall of Mirrors, Dog Soldiers (winner of the National Book Award), A Flag for Sunrise, Children of Light, Outerbridge Reach, Damascus Gate, and Bay of Souls. His story collection, Bear and His Daughter, was a finalist for the Pulitzer Prize, and his memoir, Prime Green, was published in 2006. 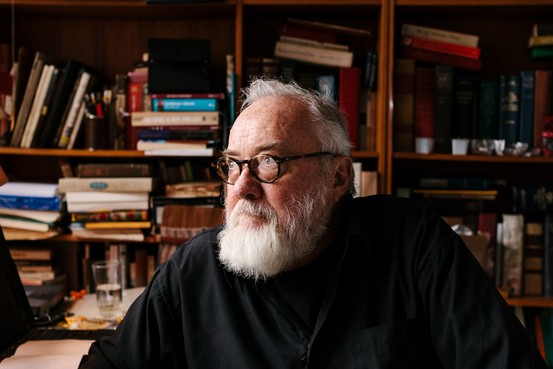