It is a great honor and a great pleasure for me to be here and to help celebrate this year’s Whiting Awards.  I’ve known about them for some time, and indeed participated in the mysterious judging selection once. These awards are, after all, among the very few of any scale for writers in this country.  They are among the few that are large enough to give the gift of time, the gift of time as writers measure it, which is in very large chunks.  Moreover, it’s certainly one of the best designed programs of this sort.  It’s purpose is to help writers in that stage of their careers when they need it the most.  Before all the prizes and all the lucrative publishing contracts.  It’s a gamble on talent, and a gamble taken wisely and with much forethought.

Over the years, Gerry Freund has found ways of putting his net out wide across the country so that a diverse and glittering array of candidates come into it.  And the system of anonymous and ever changing judges makes the selection process as fair as it can possibly be.  The trustees in this room are the ones to be thanked for it.  For, along with Gerry, they design this program, and without them, the money would have gone to, perhaps, an animal shelter. Or simply, to the IRS.

The Whiting Awards are, of course, particularly welcome in this day of declining—if not disappearing—support for individual artists.  It’s not easy to be a serious painter, composer, or filmmaker these days, but it’s also not very easy to be a serious writer.  I suppose it never was, but writers and writing did have their glory days, at least from the time of the Gutenberg Bible until not so very long ago. It was only in the 1950s, after all—it was that recently—that Hemingway and Camus were heroic figures and larger than life.  So also were Faulkner and Beckett, and in Russia, the heroes were the poets, Mandelstam and Akhmatova.

These writers were not just admired for their style, the brilliance of their prose, but because they told the truth, and because they were seen to be the consciences of their countries.  When I went to college in the early sixties, everyone wanted to be a novelist, because novelists seemed to be the creators, the innovators, the people of real spiritual depth in the society.  Nowadays, writers seem a bit overwhelmed, eclipsed by film, television, by those hundreds of thousands of bands of specialized information which flow through the electronic media.  As Fran Lebowitz once said, “Writers have become the shepherds of the electronic age.”  They are the shepherds, biding in their fields, while the city dwellers talk of Roseanne and the McLaughlin roundtable, and how to get through into the Internet.

In the last Sunday Times magazine, Chip McGrath told us that, “If Dickens were alive today, he’d be writing for the TV serial shows.”  Well, I doubt it.  Certainly not if Dickens had to live in Hollywood. For of course, in Hollywood, writers have always been seen as the lowest forms of life, the worst kind of nuisances, or simply cogs in a wheel.  A screenwriter friend recently showed me a script that had been rewritten by 20 different writers, including some of the best in the business.  Twenty writers on one script, and it still wasn’t finished.  The producers, apparently, knew exactly what they wanted, but they simply hadn’t time to do it themselves.

One wonders if any of those writers ever said to them that in the beginning, was the word, not a visual, and not a tracking shot of chaos, but the word.

In Hollywood, writers—if they’re lucky—produce properties.  Properties that belong to someone else.  I’ve actually always preferred the term, the legal term, “intellectual property” that’s used in trade negotiations and the like.  Though, I’ve discovered that intellectual property usually means software programs, not poetry.

Well, in the new, electronic media, the writer’s status is lower still.  On these huge new superhighways which the cable and telephone companies are scrambling to lay down across the country, wiring up everything else to everything else, writers are said to produce “content.” We are known as “content providers” in the industry.  So are our editors and publishers.  In fact, recently the head of a large electronic highway company called the publisher of The Wall Street Journal a content producer—and to his face.

At the same time, of course, the universities have relegated writers to an even lesser place, that of nonexistence.  At least in certain English departments, it is said that there are no writers, but only texts.  And texts, be they Moby Dick or Huckleberry Finn, have just the same status for these English departs as the living room sofa or a car accident.

Of course, this is a fad, and the good news is that it’s passing.  So much literal-mindedness could not last forever.  But for serious writers, life is difficult in other ways.  Even 20 or 30 years ago, there were a number of large circulation magazines which published serious fiction and nonfiction.  Magazines which gave journalists the time to do research.  Magazines where writers could make a living doing more or less what they wanted to do. Now The New Yorker is really the only one left.  Even Time and Newsweek are shadows of their former selves.  In fact, if you count up all the general interest magazines which publish serious writing, including those which don’t pay a living wage, and those which don’t pay for serious research, you could probably still do it on the fingers of one hand.  And you would have to include the New York Review of Books, small as its circulation is.

Somebody in the business told me the other day that there are only about 100,000 readers for high quality, general magazines in this country, and of course, they’re the same for every magazine of that quality.  Of course, there are hundreds of magazines in this country, but most of them are specialized, niche magazines.  My husband collects some of them.  His favorites are Furrow; that’s the magazine of the John Deere company. There’s also Dipstick, which is an oil change magazine. There is American Cemetery, and there are three national nail care magazines.  Presumably they pay, but it is a very narrow row to hoe.

Of course, some of them are good in their own ways.  But it was really an exceptional event when Joyce Carol Oates discovered Lewis Thomas in the New England Journal of Medicine.  Most of the large circulation magazines are, of course, formulaic.  They are receptacles to attract the advertising dollars, and their format is so rigid and so predictable that even their editors are supernumeraries.

Last year, I taught a writing course at Columbia University in the MFA program.  Some of my students had real ability.  And those were the ones I worried about.  I didn’t worry about their writing.  I wondered where they were to write, and how they were to live.  One of them, a young woman, wrote a very funny piece about a period in her life in which she died her hair a different color every month or so—blonde, black, brown, green, red, as a kind of experiment in identity.  She hoped to publish it in a women’s magazine.  I said, “But you don’t understand.  In this piece, you suggested that you might have ruined your hair with this dye jobs every month.  And no women’s magazine’s going to print that.” It reminded me of the time that Anthony West was asked by Vogue to write about the essence of beauty.  He wrote that the essence of beauty was bone structure, and the piece was turned down.

I would’ve wished for my students a new journal of opinion or a new literary magazine, something which could be their cause.  Give them a sense of fellowship, a sense of excitement about creating something new together.  But starting these magazines has become extremely difficult recently, and one literary magazine I know closed down finally, because it found it had fewer paying subscribers than writers sending in manuscripts for publication.

So, for serious writers, that leaves book publishing.  And book publishing is a truly decent business, full of intelligent and serious people, and very Catholic in its tastes.  I would far rather try and get a first book published than I would try to get a first show at an art gallery or have my first symphony played.  But book publishing provides a living for very few serious writers.  Through no fault of the publishers, most of what makes the bestseller list—or, not the bestseller list, but what I would call “the living wage” list—is real two dimensional stuff.  It’s kind of intellectual cotton candy.  And it’s cotton candy that the college educated readers consume along with everyone else.

I don’t think that writers are going to become that obsolete.  They may stay shepherds, but they’re not going to disappear entirely, because the vast maw of the electronic media is going to have to be filled with something.  And writers, however humble their status, are going to have jobs providing content.  What worries me is not that writers will starve, but rather the kind of content they’ll be asked to provide.  The Internet, I’m told, is now being referred to as the information landfill. Well, of course, Gershwin came out of Tin Pan Alley, and there are always lotuses in the mud, but what worries me is that serious work is being overwhelmed in what in the electronic world, they call, the garbage.  The garbage going in and the garbage going out.  GIGO, they call it.

Still, this is an occasion to take heart.  We have here ten writers who are extremely serious, and have somehow managed to survive, and who will give us terrific and serious work in the future.  And we have a foundation that’s doing just the right thing. May it go on.

Frances FitzGerald is an author and a journalist. She has worked for The New Yorker and The New York Review of Books. Her books include Fire in the Lake, Cities on a Hill, Way Out in the Blue: Reagan, Star Wars, and the End of the Cold War. Her prizes include the Pulitzer Prize, the Bancroft Award for History, and the National Book Award. 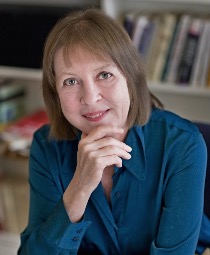