John Donne once said that love “makes one little room an everywhere.” And so it’s my hope that the love I have for these writers we’re celebrating tonight makes this screen an everywhere. What I love about the Whiting award is that it celebrates writers in all genres who write excellent sentences—tonight we celebrate the poetry of the playwright; the imagination of the non-fiction writer, the drama of the fiction writer.

My primary genre is the theater, which traffics in presence, in that barely there dust we inhale backstage. But presence is what we’re not supposed to do at the moment. That magical substance—air—which makes theater different from books, or films-- is what we fear right now. Air contains the invisible, the ineffable-- and air also contains germs.

Playwrights tend to dread hearing coughs in the theater because it means we’ve bored the audience; now we fear the cough in a new way.

I recently learned that when the plague shut down the theaters in London in the 1590s, Shakespeare turned to poetry. From his “Venus and Adonis,” penned while the playhouses were closed and writers were quarantined, came this somewhat strange compliment: “The plague is banished by thy breath.” Should we all be staying home and writing and reading poetry as a curative for the next month?

Books, unlike theater, unlike poetry readings, carry no germs. In books are ideas that can spread, but without contagion. The libraries may be closed but the books are all open.

My children’s school has closed indefinitely, and I’ve been encouraging my kids to learn a new poetic form every day. My son William started with a sonnet, an ode to candy. The final couplet: “Now I must eat you with a splendid grace/Remember how I put you in my solemn face.”

William Wordsworth once wrote of the sonnet:

Nuns fret not at their convent’s narrow room;
And hermits are contented with their cells;
And students with their pensive citadels...

In truth the prison, into which we doom
ourselves, no prison is: and hence for me,
in sundry moods, ’twas pastime to be bound
within the Sonnet’s scanty plot of ground;

Pleased if some Souls (for such there needs must be)
who have felt the weight of too much liberty,
should find brief solace there, as I have found.

Wordsworth found liberty in the captivity, or structure, of the sonnet. How can we find meaning, and liberation, in our voluntary captivity this month? How can we not devolve into utter formlessness, for example, standing by the sink and eating a teaspoon of peanut butter with some chocolate chips inside, which I just did before writing this speech?

After we worked on sonnets, my son and I turned to haiku. William wrote this one:
“The store is empty/
And the theaters are shut/
But my mind is full.”

What can we writers do with all of our full minds right now? The simple answer for this particular audience: we write.

I can recall the moment after I won my Whiting award about fifteen years ago. I was the only writer dressed in green, everyone else wore black, and it made me feel slightly juvenile, springy, and midwestern. (I’m from Chicago so I don’t mean that as an insult, but as a badge of courage.)

That night I met one of my literary heroes--Sharon Olds. She congratulated me at the party. I realized only later that it was highly likely she was on the anonymous committee that year. When she congratulated me, I put my head down and said something modest, like: “I can’t really take it all in.” She lifted my head up, looked into my eyes, paused and said: “Take it in. All these writers believe in your work. Take it in.”

So I want to say to this year’s winners, from Sharon Olds’ mouth to mine: take it in. I can’t look into your eyes, I can’t lift your chin, but I will say it on this screen—Take it in.

Sarah Ruhl is a Pulitzer Prize finalist and Tony Award nominee, and a recipient of the Steinberg Distinguished Playwright Award, a PEN America literary award, The Susan Smith Blackburn Prize, and a MacArthur Fellowship. Her plays have been done on and off Broadway, around the country, and internationally, translated into more than a dozen languages. Her book of essays on the theater and motherhood, 100 Essays I Don’t Have Time to Write, was a Times Notable Book of the Year, and she is most recently the author of the poetry collection 44 Poems for You. She teaches at the Yale School of Drama and lives in Brooklyn with her family. Ms. Ruhl received a Whiting Award in 2003. 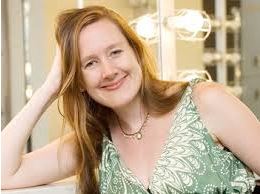